My kids were born on the same day (two years apart) and as such, their birthdays are always somewhat a challenging affair...so a couple of years ago, it was a Circus theme with the mandatory carnival games as party activities!  This is how it all turned out... 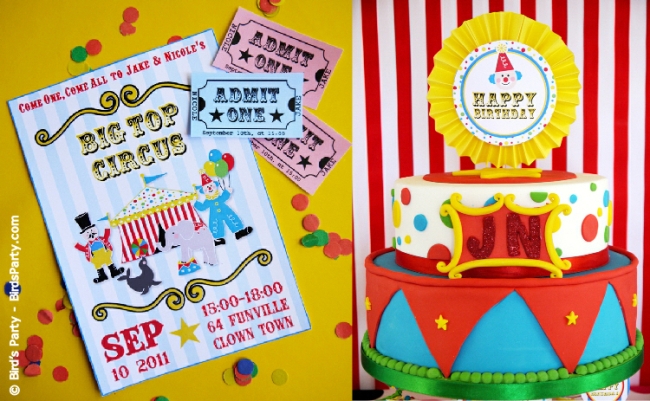 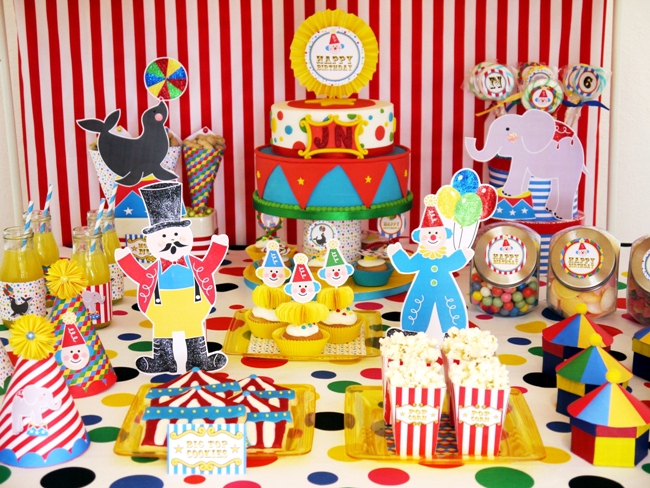 I designed the party printables to emulate the traditional circus colors red, white and blue, but added different pattern (polka dots, harlequin, stripes) to keep things fun and eclectic. This is one of those party themes that allows for bold use of pattern and colors, so I really went to town!

For the party invites I wanted  a "circus is in town poster" kind of look, and included confetti and printable carnival tickets in the envelopes. The printable tickets were personalized with my kids' names on, and had the details of the party too. 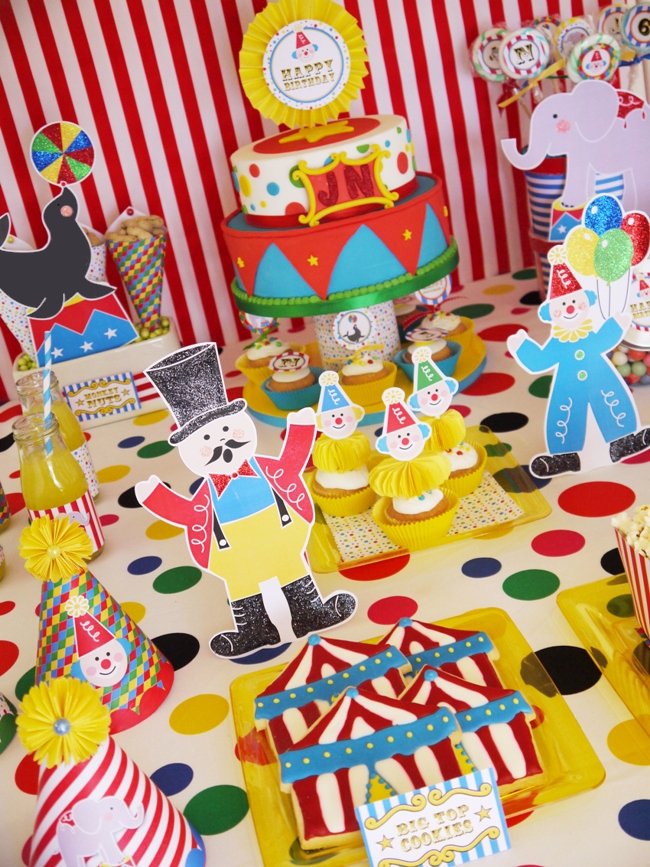 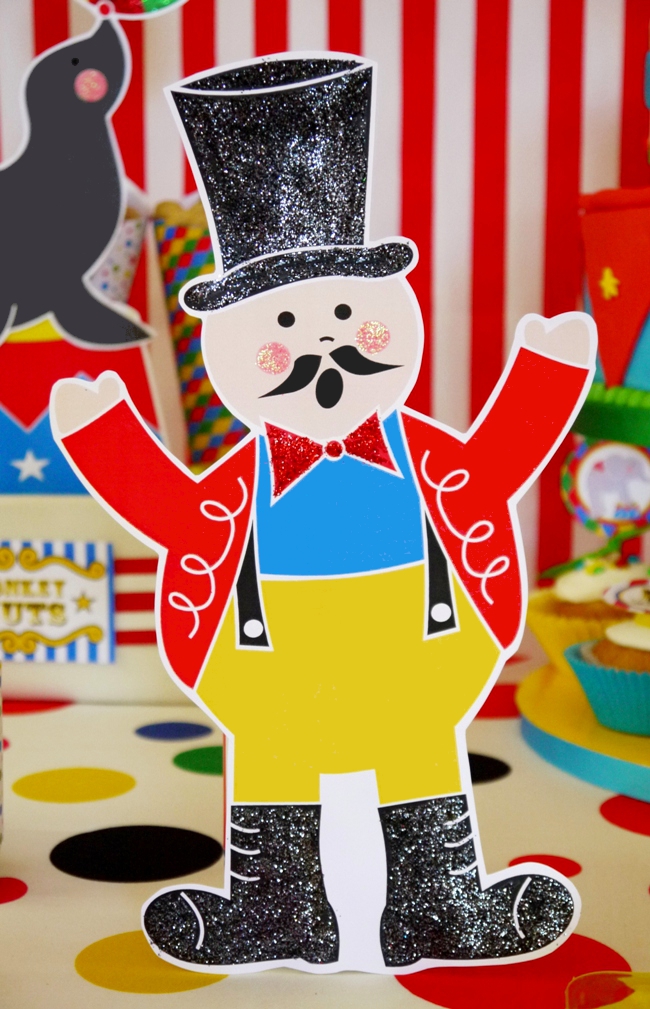 I always love using printable cut-out or party icons to embellish my dessert tables, and wanted to re-create a "3D" mini-circus as my main desserts table.

Using my kid's garden gazebo frame and a piece of MDF from my local hardware store for the table top, I created a bespoke mini circus tent to house the desserts. A yellow oil cloth fabric I had at home was perfect for the roof of the tent, which I pegged in place with double-sided tape and some plastic pegs at the bag (where it wouldn't be seen). The gazebo frame is a simple system of pipes, and could be re-created using PVC piping similar to this example. 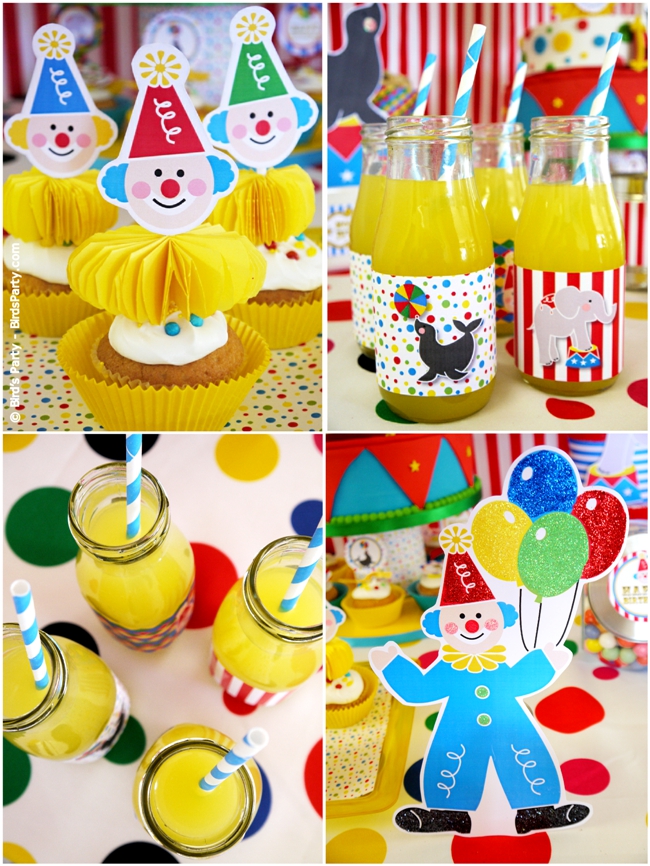 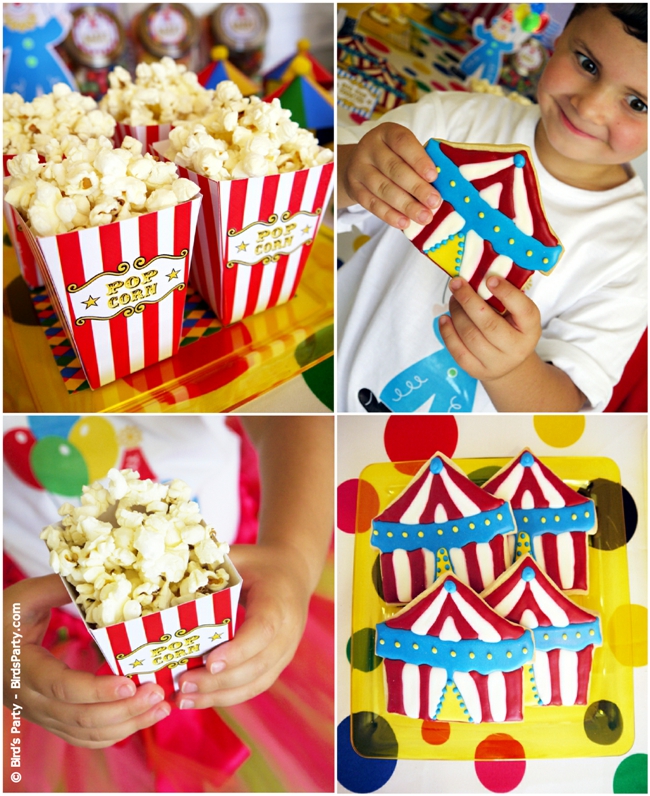 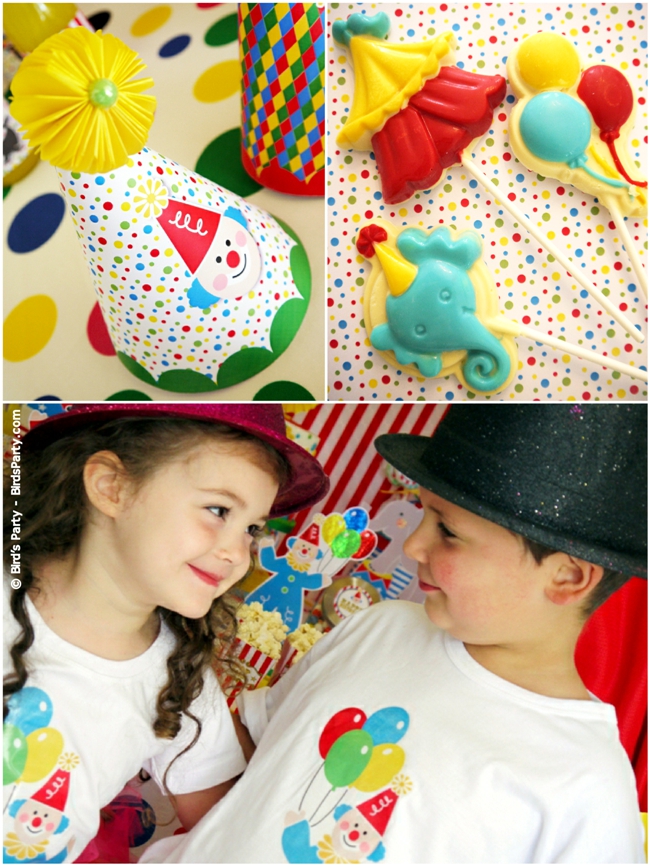 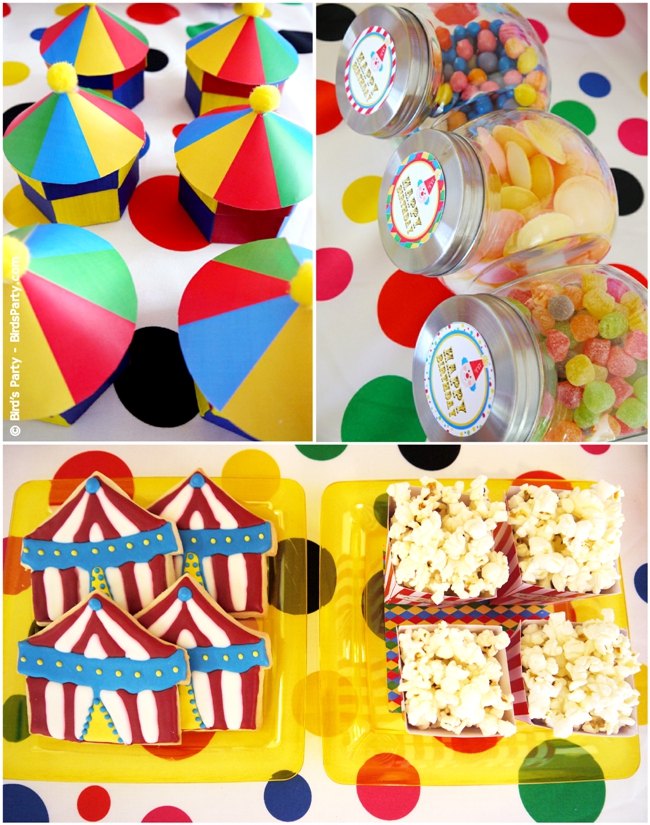 Circus or carnival food is fairly simple, so I relished the opportunity to make it part of the décor too! The monkey nuts were displayed in cute paper cones , which I made using the scrapbook paper from the printable collection, and embellished with beads. The popcorn was displayed in the printable popcorn boxes from the "Big Top Circus" collection. The handmade sugar lollipops from a local artisan, were decorated with printable tags and displayed in a round gift box filled with candy balls. The fabulous, decorated cookies from Sweet Dough tied in beautifully with the rest of the décor! They were also given out as favors. 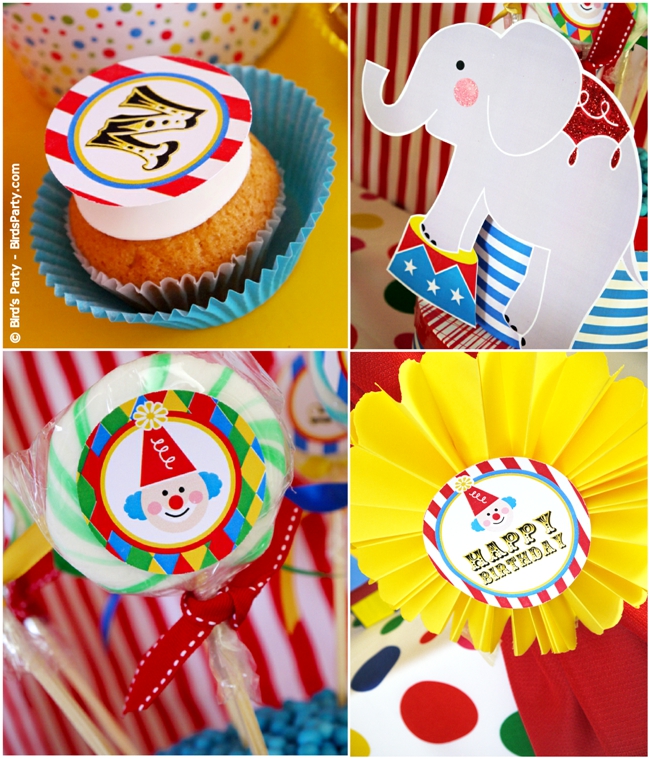 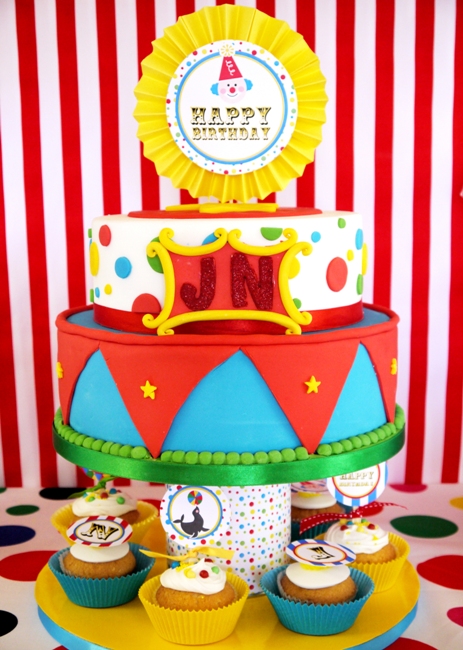 The centerpiece of the desserts table was the fabulous cake! I emailed my friend Livy from La Lettre Gourmande about what I had in mind, and she matched it to perfection! It really was the star of the table, and I decorated the top with another paper rosette and a large party tag. The cupcake/cake stand was a DIY job, created with a simple cake board, which sat on top of a large food can, wrapped in more scrapbook paper! A tutorial can be found here. 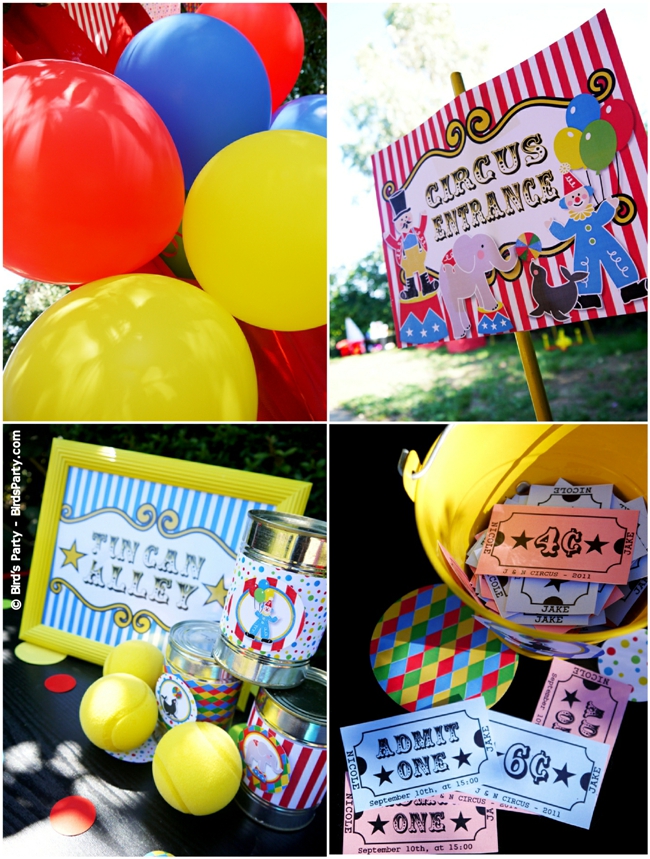 Party Activities - Carnival-style Games: In-keeping with the theme, I created some carnival-style game booths in the garden. Well, thank goodness for Martha Stewart where I got most of my inspiration for these games from! The fun thing about these is that the kids helped me set it all up and we loved trying out each game before the party too! ;) 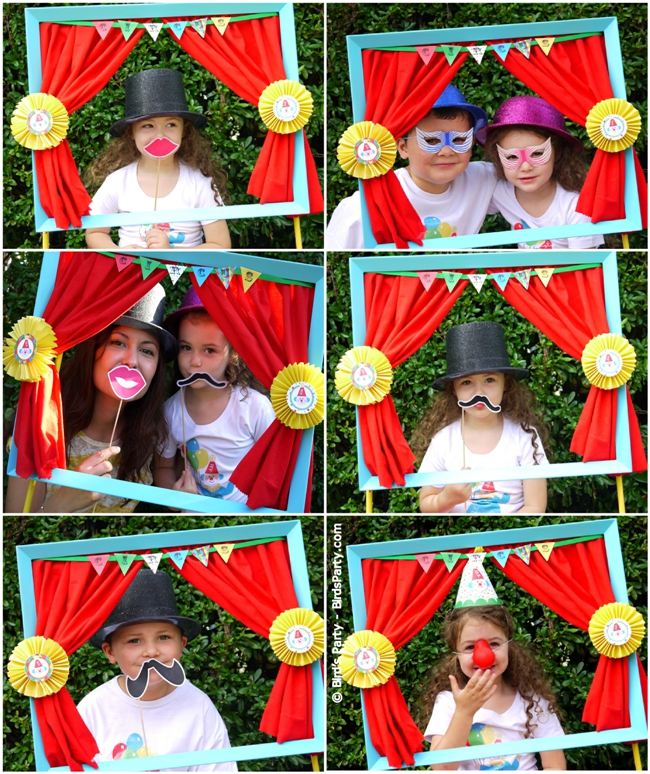 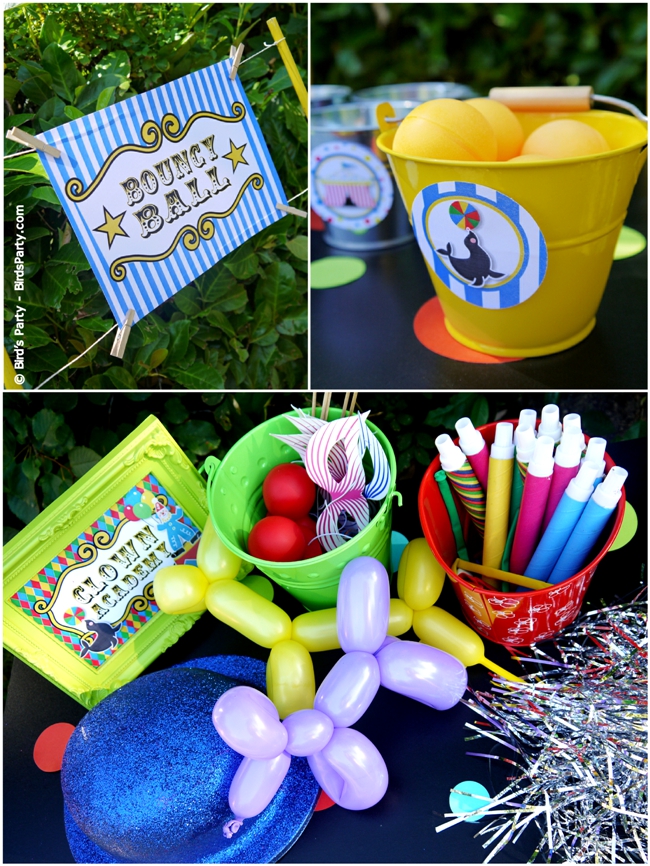 1) Clown Academy Booth: This booth had juggling games, face-painting, wigs, masks, the printable photo props, balloon making kits, as well as fun hats so the kids got disguised as they wished. This booth was very conveniently placed right next to the photo booth.

2) Photo Booth: I used frame prop to emulate the table styling. I used a large wooden photo frame without the glass (from local thrifty store), and hot glued a piece of red fabric to the back to make the curtains. Then I decorated with a mini printable bunting and some more of those paper rosettes. I attached it to the metal garden poles and set 2 toadstool stools behind for the kiddies to sit on! These stool were on sale and each  was about $7 from my local home-ware store (Casa). My camera and tripod sat in front of the booth so I could capture all the  little clowns!

3) Ring Toss Booth: Tossing the rings to earn points, depending on which peg they land. Easy and effective! I got this game from my local thrifty store too, and was inspired by a similar one I saw on the Martha Stewart’s site.

4) Bouncy Ball Booth: I found his idea on Martha Stewart.com also – Little metal pails were decorated with party tags, and a color circle on the bottom to indicate the values of each pail. The idea here is to drop the ping pong balls from a height, and get them to land inside the pails. Sounds easier than it actually is!

5) Tin Can Alley: Empty food cans wrapped in scrapbook paper. The objective of the game is to try and knock down all the cans with only 3 balls. The soft balls were also from local thrifty store.

6) Duck Pond Booth: My “invention” and fave game of all! The plastic ducks were from my local “dollar” store. I wrapped a bamboo rod with green and yellow electrical tape (you could also use ribbon) and tied a piece of string to the end. I then hot glue a very strong magnet (from craft stores) to the tip of the string. I pushed metal pins into the head of each duck to make them “magnetic” Filled an old wine barrel with water, attached the printable signage  to the barrel and set to play – Very happy to say that fun was had by adults and kids alike!

GigMasters Editor's Note:
In addition to carnival games, adding some circus themed entertainment is a great way to keep guests excited. Consider hiring a Clown, circus act, acrobat or face painter to add to the authenticity of your Big Top Circus Birthday! 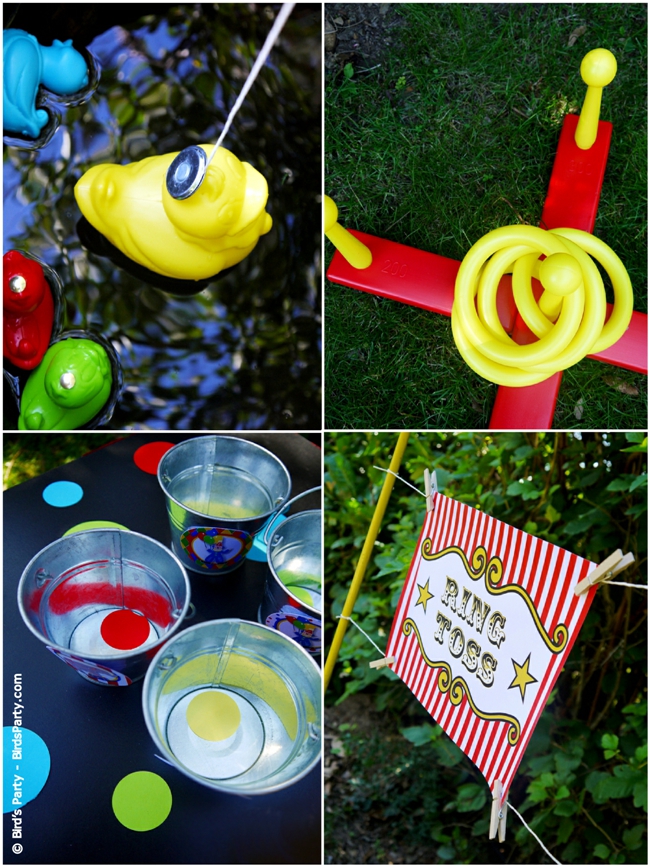 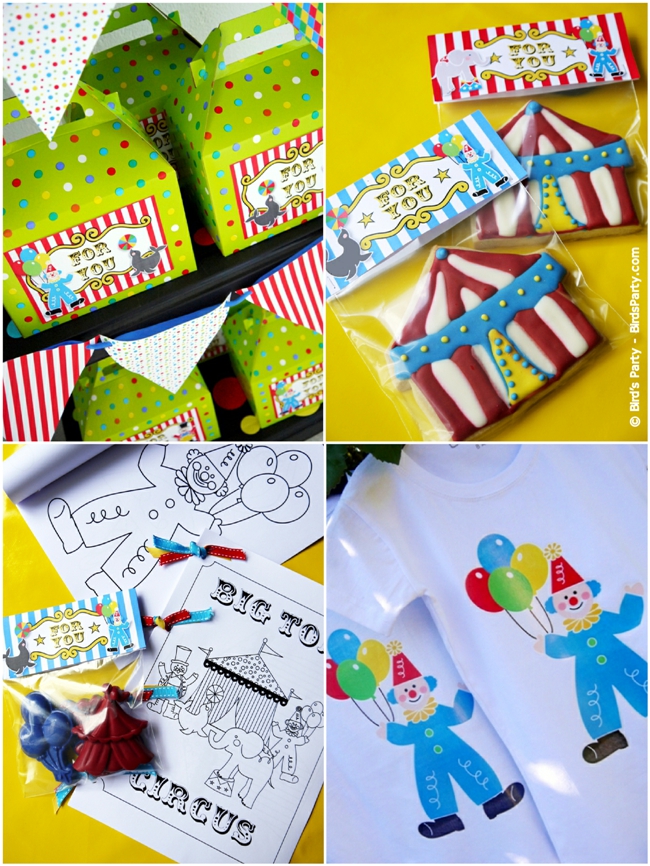