We hired them for a rehearsal dinner, they were fantastic. Many guests were extremely impressed with the song selection and professionalism of the band. They made a very positive impact on the evening.

They were extraordinary. Music, singing, songs selected, perfect. Already given a few cards out. Would book them again in an instant. Thank you Barbara Perk.

A Kool Nights Band played at our wedding and they were absolutely perfect. I would highly recommend them for any event.

They were prompt, professional, accommodating, and very good performers. The night went smoothly thanks to A Kool Nights Band. We had many compliments on the band. I would absolutely recommend them for any event.

A Kool Nights Band was absolutely perfect for my wedding! They learned and performed my requested first dance song which meant so much to me. Plus, they were open to my requests and very patient with me. I had many, many compliments from my guests on the band!

A Kool Nights Band was perfect for our company's project/fundraiser kick-off party! We hired a trio of their musicians to play jazzy-style instrumental music as the "background noise" for the party. There were approximately 75 people in attendance, many of which approached me asking for further information about the band. Craig, my main point of contact, was very responsive, professional, and accommodating. The band even trudged through 5-8" of snow to attend our event! We were very thankful that they did! It was a successful night and we were pleased with the level of class that they helped bring.

A Kool Night's Band was great for our wedding reception! They were easy to work with and very professional, and they even took the time to learn a special song that they performed for our first dance! They took on the MC role with ease and kept everything going smoothly. The music was great, and my guests, young and old, really enjoyed it and got out on the dance floor. I'd highly recommend this group!

Western Reserve PBS held a Downton Abbey inspired Valentine's Day Dinner Dance as a fundraiser event. We needed a band that could play music from the 1920's to today that would fit the elegant evening that we had planned. A Kool Night's Band did an awesome job and kept our dance floor filled!

Craig and the band were awesome, they more than exceeded my hopes!! Easy to work with and a joy to listen to for all age groups at our wedding!! I'm already looking for a reason to hire them for an event again!

A Kool Night's Band was absolutely incredible! They were prompt and professional, and even helped keep me on-task when I was too scattered with the details of the night to be aware of the timing of announcements at our fundraiser. Plus, they went out of their way to learn a special song that I requested. There's no doubt that A Kool Night's Band made the evening. They sounded beyond fantastic and they got everyone dancing. When they played their first song, the other organizers of the fundraiser (who hadn't heard them before) looked at me with jaws dropped. Just amazing. Their band-stand set up looked great too. I'd recommend them to anyone anytime for anything.

I hired A Kool Nights Band for my wedding rehearsal. It was an outdoor, catered BBQ with about 110 people. Craig and the band arrived early and even started playing 30 minutes prior to the agreed upon start time because people were showing up. They were the hit of the party and everyone loved them. All five of them are very talented and the sound was amazing. I will be hiring them again for future events. They were very professional and I would recommend them for any of your events in the future. A true jazz band that is perfect for dinner and some dancing. Thank you for making our night one we won't forget! Zac and Molly Barson

I was impressed with Craig and the band. The music was great . My guests commented that they enjoyed the music and they enjoyed dancing as well. Craig was easy to get ahold of and answered my questions efficiently . I would recommend them. Lynn

Don't even think about it...if you are reading this....hire these guys. I contacted them 72 hrs prior to my event (a 50th Anniversary Party at Crop Restaurant in Cleveland). Thank goodness they were available. They were ontime, professional, TALENTED beyond my expectations, and extremely reasonably priced. All of our guests could not stop talking about how great this band was. I could not have been more impressed or pleased. The are superb musicians. They have my highest recommendation.

They did a great job, sounded great! I would definitively have them back.

I was unfortunately unable to attend due to a funeral, BUT everyone has sent me emails and told me how wonderful this band was and that they loved them! Bravo to Craig Henschen and the Kool Night's Band 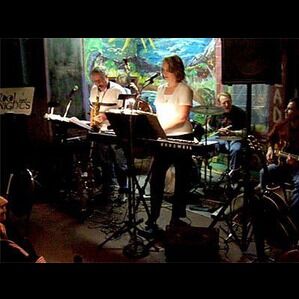