Acoustic Guitar from Forest Park, IL - Will travel up to 50 miles
MEMBER SINCE 2009
$400 - $800 per event
Mike Redmond, Katie Hull-Redmond and Ted Aliotta have performed together for several years. Individually, though, their musical dreams and experiences go back decades. Like most groups, The Redmonds draw on years of experience and experimentation when they create music. And like all great musicians, they love doing it.

Katie Hull-Redmond grew up singing at countless family events and in church. As an adult she’s sung professionally at weddings, corporate events, festivals, and other social functions around the Chicago area for 20 years. While she exudes a friendly rock ‘n’ roll attitude, her musical influences range the classic to the contemporary rock - from Schubert's Ave Maria to Patti LaBelle to Janis Joplin. She’s still being influenced, and still enjoying hearing new things.

“When I get hooked on a song, I really get hooked,” said Katie. “I don’t listen to anything else until I get comfortable with it.”

Katie admits she’s different from Mike in at least one way.

“I get motivated to get up for a gig by listening to something like the Beatles or the Stones or Lynyrd Skynyrd,” she said. “Michael doesn’t need any motivation. He’s a professional. He can just go out and play.”

Mike Redmond has performed professionally for 30 years. He first entered the music scene as a teen aged soundman for Soundz Music in 1979, working with such bands as Cheap Trick, Molly Hatchet, the Dixie Dregs and America. Along the way he pursued his own opportunities to take the stage, driving hundreds of miles to gigs while managed by R.J. Kaltenbach and T.J. Sheppard. By the time he was 24 he had a development deal with Phil Walden’s Capricorn Records.

Over the years Mike’s played with Fugitive, Magazine, The Redstones and, since 1997, with Off Broadway. That experience has left him equally at home sitting behind an acoustic 12-string as he is hooked up to his electric Hamer, laying down rhythm riffs.

Mike values the time he spent behind the sound board, crediting it with giving him a heightened appreciation for what’s needed technically to support his efforts on stage

“It’s the most important thing about music, after all,” he said, “how it sounds.”

Like Mike and Katie Redmond, guitarist and harmonica player Ted Alliota has music in his DNA. About two years ago he sat in with the Redmonds one night, fell into the groove, and stayed.

Of course, many Chicagoans will recognize Ted as the Alliota in Aliotta, Haynes and Jeremiah. The band had a major 1970 hit with a song Ted helped pen, "Lake Shore Drive." Most, however, will not recall that the year before Lake Shore Drive hit the airwaves, Aliotta won the lead role in the rock opera "Hair."

In 1977 Ted put together the popular Chicago band "Acme Thunder" and moved into a more hard rock groove. The next year the band enlisted former Canned Heat guitarist Harvey Mandel and put out their one album, "Let's All Get Naked." In 1994 Ted formed " Groove Machine," which still appears in concert, and has released 2 CD's.

It was Robert Plant who, as a young father and rocker, once said he’d be hard pressed to say which was more important to him, the pleasures of the hearth, or his time spent in Dionysian abandon on stage. The Redmonds understand that, and are grateful for having both as well.

For Mike and Katie Redmond, the yin and the yang of their lives nowadays are their music and their two little girls. “We feel very fortunate, with our young family, for the opportunity to go out and perform and be with our friends,” said Katie. Mike is, he admits, “Doing what musicians do and loving it.” “It sounds corny,” he says with a shrug. “It’s everything to me, besides my kids.” As they move forward with the unfolding of family life and musical exploration, it’s all good. When the dancing days of summer arrive once again, the Redmonds will spend more than a few evenings on their back deck with the girls, with friends, working in new songs, new sounds, new feeling.

“It’s just so natural for us to sit down and work things out and play together,” said Katie, who sees it “just gets better and better with every show.”

“We love sharing it with people.” 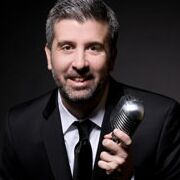