Jazz Band from Sarasota, FL - Will travel up to 100 miles
16
31 VERIFIED BOOKINGS
MEMBER SINCE 2010
ACCEPTS ONLINE PAYMENTS
$600 - $6000 per event
ACCEPTS ONLINE PAYMENTS
VIRTUAL SERVICES OFFERED
Proudly presenting Florida's premiere acoustic jazz/swing ensemble, the Hot Club of SRQ- "Reputably the most swinging, versatile and refined Gypsy Jazz ensemble in the South" (Mac Chrupcala). We play music that is deeply rooted in the style of Django Reinhardt and Stephane Grappelli. This music simply swings and is full of beauty and romance! We emulate the style of what the French call "Jazz Manouche" and "Le Jazz Hot" in the style of Sinti virtuosos and the "Quintette du Hot Club de France" circa 1934-1948. We have also have a trio and a duo version of this ensemble if your event requires a smaller footprint.

We have the experience and artistry to help you create the perfect ambiance for your wedding, private party, fundraiser, corporate and fashion event. We can provide lighting and sound for any event. Please visit our media/audio to see and hear for yourself. We are also proud supporters of marriage equality.

Each performer is absolutely proficient in classical as well as the jazz genre (this is not common). We draw inspiration from all cultures playing music from around the globe specializing in Rumba Flamenco, Gypsy Jazz, Bossanova, Samba, Tango, Afro Cuban and the American songbook.

We pride ourselves in working together as a team to assure that every client's needs are understood, recognized and exceeded during the performance.

Keven Aland (violin) began his studies with Master Miltiades Siadimas of Athens, Greece (acclaimed soloist of the N.Y. Philharmonic and Metropolitan Opera). Aland gave his solo debut with the Venice Symphony at age 14. In high school, Keven received highest honors in All-State Orchestra and received much recognition from Governor Martinez as recipient of the Southern Bell Fellowship two years in a row. A graduate of the University of Colorado at Boulder, Keven had a Fellowship with the London Symphony Orchestra and has played with the South Florida Orchestra, Sarasota Chamber Orchestra, Transylvania Symphony Orchestra, Boulder Philharmonic, and the Shostakovich String Quartet. After completing his performance degree at C.U. Boulder, Aland discovered his passion for jazz and has studied with Sandro Roy, John Serry and has attended festival workshops at Django Fest NW and Django in June. Aland is a co-founder of the Lotus Fire, founder of Sampa Jazz and the Hot Club of SRQ. He can be seen performing locally with the Hot Club of SRQ and occasionally with Impromptu Jazz, Hot Sun Quartet and Gypsy Wind.

Jon McLaughlin (guitar) is a very talented performer and extremely gifted accompanist. Jon studied with Rex Willis while attending Florida College. A native of Sarasota, Florida, he performed with many rumba flamenco/gypsy swing/tango bands including Los Listos, Los Rumberos, Cabal, and Douce Ambiance and most notably a member of The Lotus Fire and The Willie Royal Quartet.

Glenn Stevenson (up-right bass) began performing professionally as a teenager and was brought up through the ranks with some of Tampa's Bay areas finest jazz musicians such as Kenny Drew Jr., Ray Biscoglia, Mark Fox, Linda Nash, Nate Najar, James Suggs and many others. In addition to playing bass, Glenn is a masterful art framer and has worked over 10 years framing Salvador Dali's work in St. Petersburg.

Gustav Viehmeyer (guitar) A native of Sarasota, Florida was also born into a musical family discovered his a passion for Django Reinhardt's Manouche style of guitar playing as a young teen and has spent countless hours transcribing and memorizing solos of the greatest gypsy jazz guitarists in the world. His biggest influence is Birelli Lagrene and has successfully mastered many of the masters musical vocabulary. Gustav has played all over the country and has been invited to perform with Stephane Wrembel, Bucky Pizzarelli, Frank Vignola and many other top names in Gypsy Jazz. Gustav Viehmeyer is the newest member of the Hot Club of SRQ.

Here is a short list of some clients we have had the honor of serving:

Awesome band. Guaranteed good time. Highly recommend these guys can really jam! You can’t go wrong booking them for your next event.

I could not have been more pleased with Aland Music. They are very accomplished, and very talented. To top it off, they play with soul; they are not mere technicians. I highly recommend Aland Music.

Thank you Holly for your kind words and hospitality. We were very honored to be asked to share our music on such a special occasion and to be able to perform for such an appreciative and captive audience. We hope you will consider us again for your next big celebration, all the best. 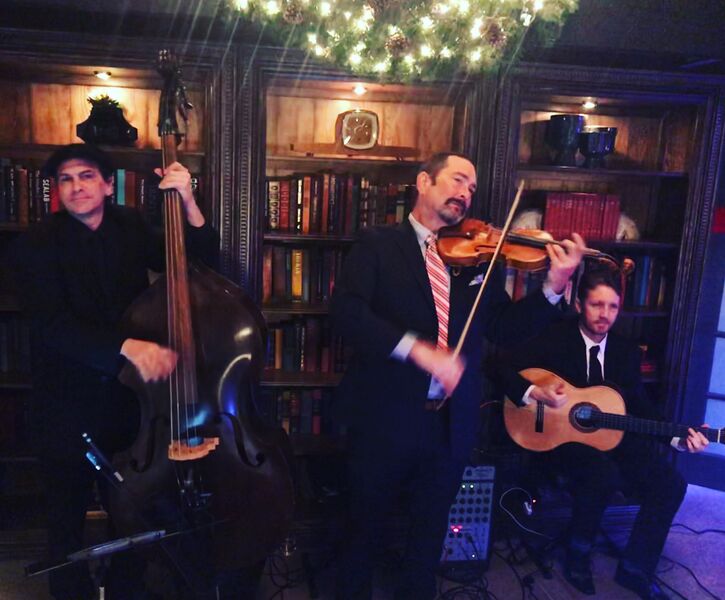 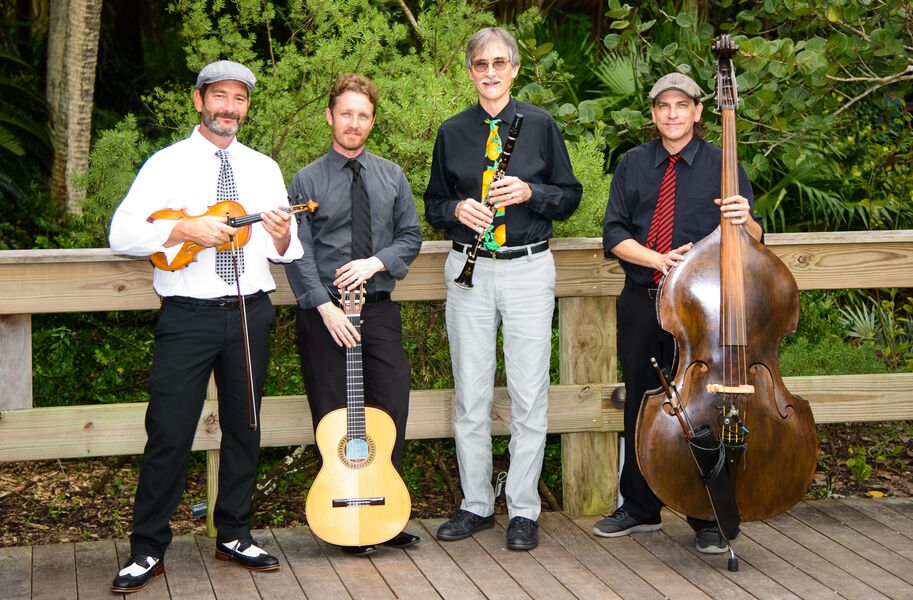 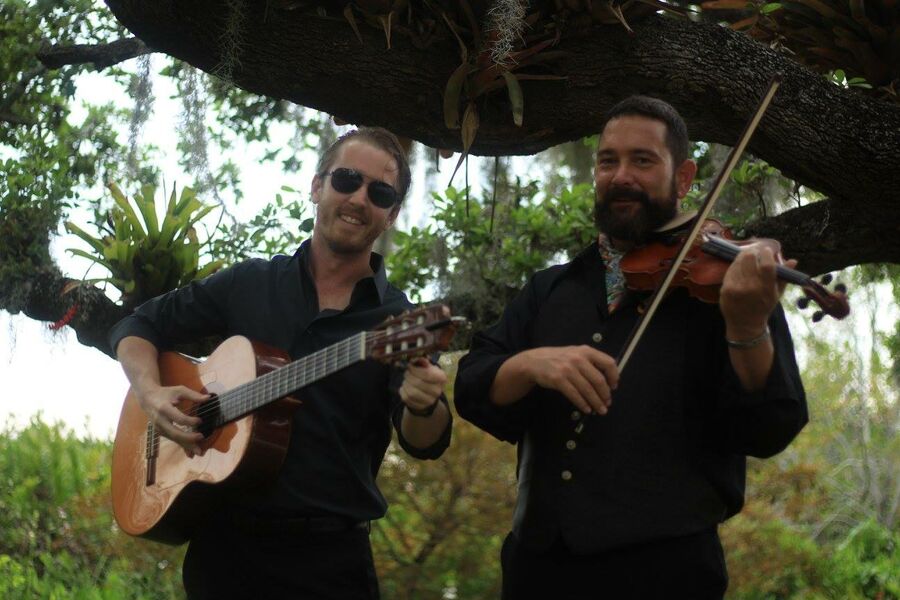 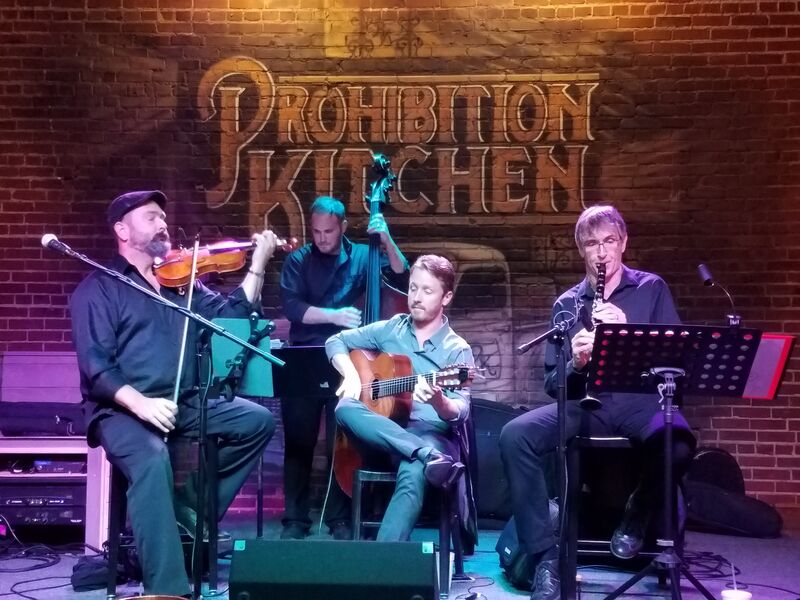 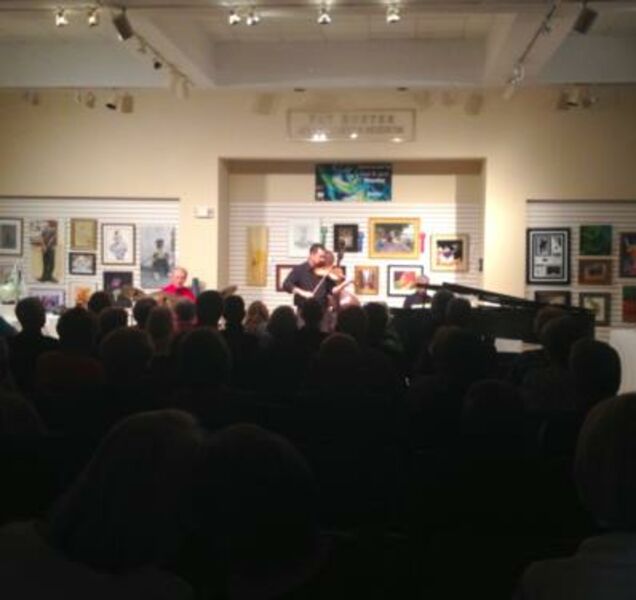 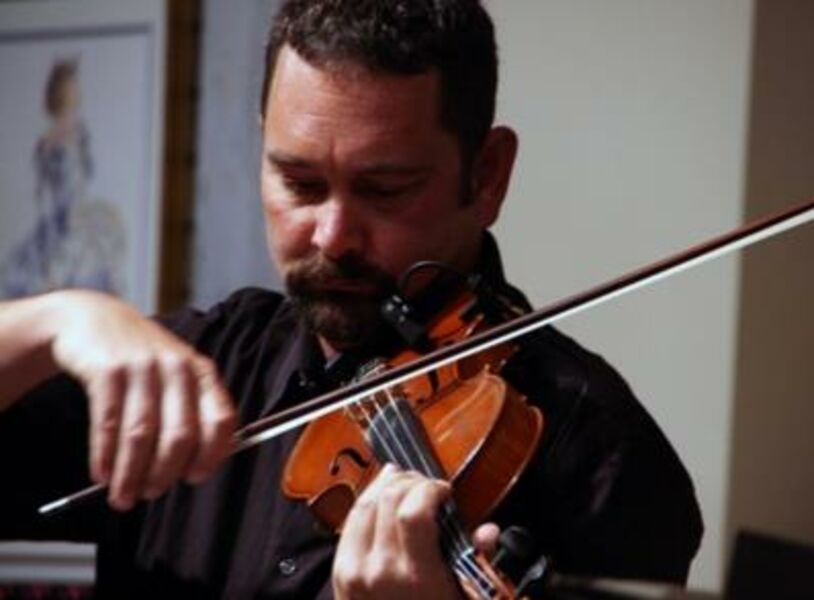 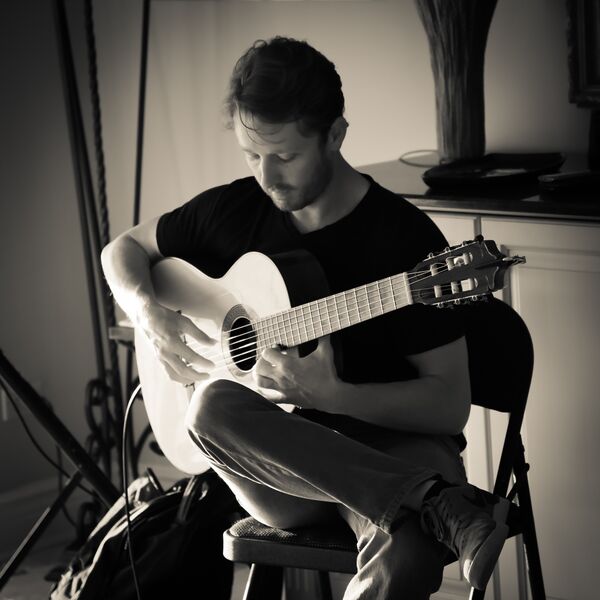 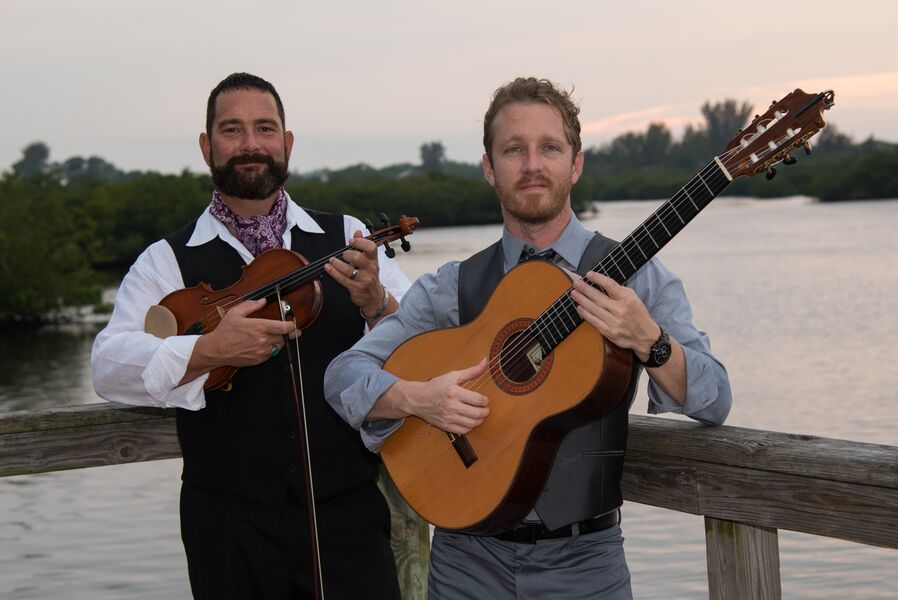 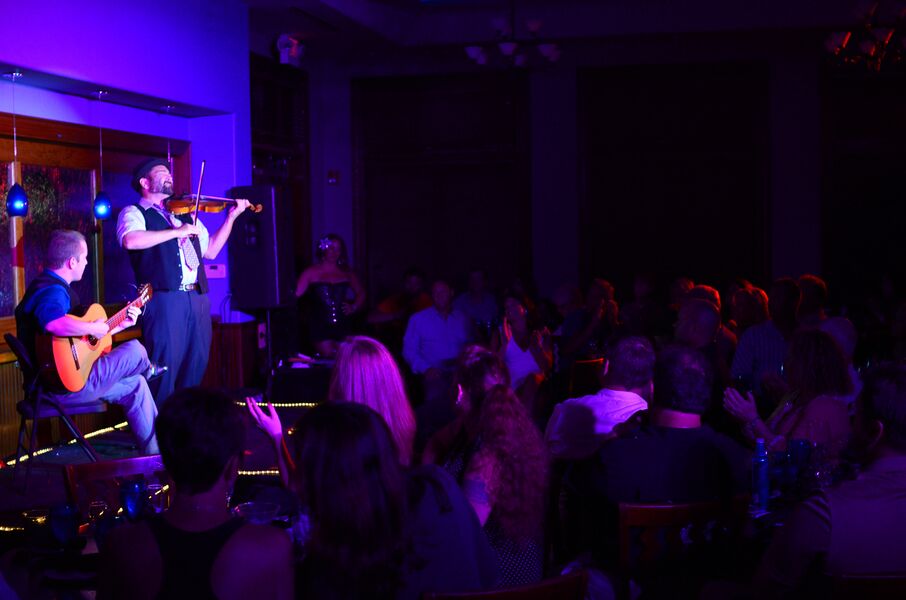 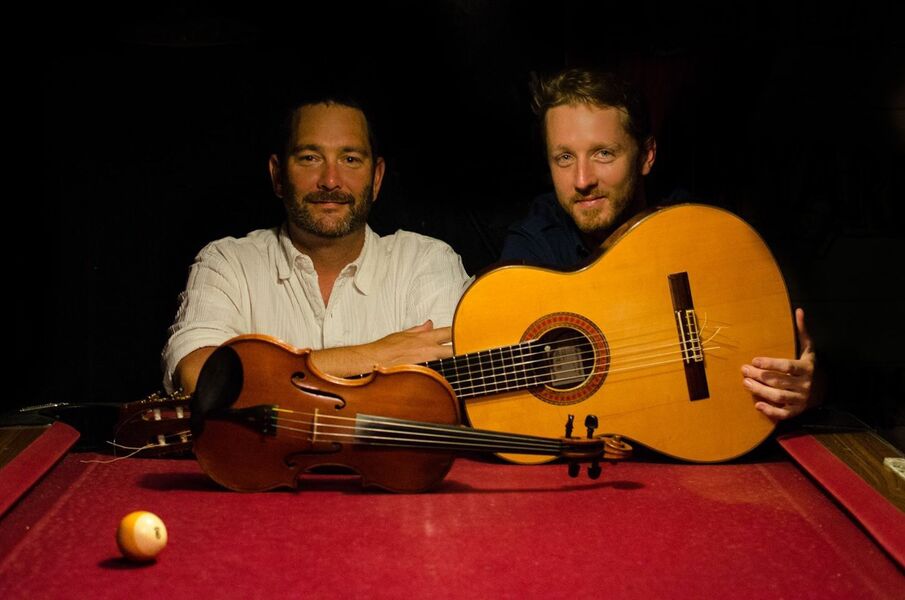