Enturaj is the best band a bride could ask for! They were more than accommodating from day one! It was an instant connection! Stacia has been in constant contact with me, ensuring me along the way. She is very personable and has a calming effect, allowing me to relax. She continued to give me immediate feedback, advice, encouragement and a listening ear. What more can you ask for! Enturaj even went above and beyond by rehearsing one of my favorite songs. I was so impressed that I have included it as my "second" first dance! My guests were equally impressed and many have been asking for business cards! My evening would NOT have been a success without Enturaj!

Enturaj was an amazing band. They worked with my daughter and her fiance to insure that everything was just as they wanted. Enturaj was able to keep the dance floor full the entire evening. Our guest commented on what an amazing band. They even accommodated a friend of the happy couple who wanted to sing a special song for them. Even our photographer left later than planned and commented that band made her want to stay!!! Thank you Enturaj for making our daughter's wedding reception fun for everyone!!!

We loved the music and the energy Enturaj brought to our wedding reception. From the start, Stacia asked us a lot of questions to make sure the music would fit the tone and style of our reception, and it did. A lot of attention to detail and above all, a great sound. Enturaj was definitely a hit!

ENTURAJ was great!!! They kept us dancing all night long. They are consumate musicians and performers who know how to keep the energy up and the people jumpin'. They were a complete joy to work with in arranging the details of the event and were very proactive in making sure we got what we were looking for in our dance party band. I would 100% recommend them to anyone looking for great talent, great music, ease of arrangements, and no-stress perfection.

Enturaj was great! They helped me with all the requests that my mother-in-law and I came up with for my wedding reception. They also managed to get in songs from all different kind of genres that I told them I liked. Stacia (my band contact) was very organized and was so easy to work with. I had people coming up to me at the reception asking where I found them! I would definitely suggest them to anybody that is looking for a band They will get the people at your event up and moving!!!

At the last moment, I was placed in charge of finding a group literally 2 weeks before the party, I also had the limitation of living in Washington, DC and planning a party that was hosted in Savannah, GA. Even though Enturaj is based out of Atlanta, they made it work. Enturaj assisted me greatly and the event went smoothly as though it was planned for several months! They performed for my father's retirement party which ages ranged from late 70's to teenagers. Every set chosen was enjoyed by all ages which is very difficult. In all, I'd highly consider this group as their covers are great and their original music is just as impressive!

Enturaj played at my recent wedding reception. I had never used Gigmasters before, therefore I was a little skeptical about hiring a band that was unfamiliar. They were AWESOME! The band was SO professional and accomodating. They worked well with the crowd and found a way to get everyone dancing. I will use them again for upcoming events and gladly recommend them to others! They are a fabulous band, especially for the cost.

The band was great they socialized well with the quest. The music was super. We made a great decision to invite Enturaj to complete our engagment.

I booked Enturaj for an Engagement Party. They were so pleasant to work with; it made the planning process a breeze. Enturaj’s performance was nothing less than AMAZING! They are extremely talented and put on a wonderful show! I have had numerous people asking for their contact information for their own upcoming events. I would recommend this band 110%!!! They are incredible!

Great communication and fun to work with!

I really enjoyed Enturaj, my guest where blown away. The band sounded, amazing and cater to the needs of the crowd. They dj and sung when it was appropriated. Thank you, for making this day very important and special for us.

I'll start off by saying that Enturaj is very talented, and I really enjoyed the music they played. The issue was that they only played for about 2 and a half hours, while we had contracted them for 4 hours. In the "bid" we accepted, the phrase "without breaks" was used. Be aware, this does not, as one might intuitively think, mean the band will play without taking a break. They played two sets, the first which was slightly over an hour, took a 30 min break, played the second set which was roughly an hour and a half, then "DJed" from 11:45 till 1:00 despite a large, enthusiastic crowd. I would not recommend this band. Furthermore, I would warn others to stay away.

This fraternity group was awesome to perform for and throughout the evening everyone loved our service and the rep that reported this feedback was very professional in spite of the commentary. Unfortunately the negative things he's reporting about our service is not true. We provided exactly what was detailed in his contract and we didn't end our services until 1am as the contract illustrated...We provided the DJ as a gift to this client because they had nothing else to fill the void when we took our break. We started early and our second set went over the allotted time....There was also no respect for our equipment which was damaged. We appreciate the opportunity.

Enturaj was FANTASTIC! From day one, they were extremely nice to work with in terms of planning our wedding reception. They work well with special request, and Stacia does an amazing job making suggestions to help with the flow and ebb of the party. We danced all night long, and never heard a bad song. These guys were amazing. I would highly recommend them to a friend for any event, and I hope I have the chance to see them again in the future. To sum it up...Good times...actually, Great times! 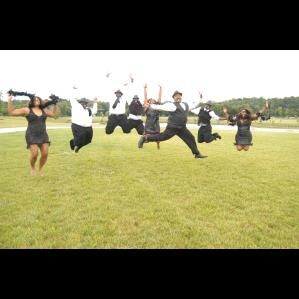