Oh my gosh. Angie will have people crying and spitting drinks. Literally. She can read a crowd like a book and she will make your event unforgettable. I never thought I would see two charity organization executives turn red in the face from laughter. Angie will bring the excitement you are looking for.

Angela had a crowd of about 60 adults absolutely howling with laughter. It could not have been funnier. The occasion was a 60'th birthday roast. She shocked the birthday boy with how well she was prepared. Just a great show! People are still talking about how funny it was 2 weeks later. It was an overall fun experience that we would love to do again.

Besides being terribly funny, the great thing about Angela is that she is very flexible in her performance, and she stretches the envelope but never breaks it with her comedy. She communicates well, both pre-event and post event. Although the weather was terrible, she showed up early and stayed late. Two weeks later, most of the attendees are still talking about her performance. And, everyone wants to see my tiara! Nice job, Angie. Oh, and did I forget to say, she is hilarious!

We can not say enough about Angela. Our party was small so I was a little worried that if only a few found her funny it could be awkward. Angela had everyone laughing and interacted with everyone in the room. The evening was a complete success. Even the staff working the party were laughing. I would recommend her highly. Be prepared to laugh!!!

When hunting through various comedians for a staff party, Angela's online recommendations stood out. So, I waited for her bid, although many comedians responded within an hour after posting. She was worth the wait. From the initial phone conversation, it was clear that she was all about MY corporation and MY wishes. The other bids were about THEIR skills & accolades. A fill-in-the-blank sheet w/ questions about staff, one long email, a brief phone call to double check facts & we were done!. Angela's performance was flawless; everyone was in stitches. Stayed for photos, brought gag gifts, was very well versed in my staff's quirks, which she cleverly "attacked".

Where do I start,hired her last minute, thank goodness she was available. She tailored her performance at a moments notice. Even though we were a small group, she hit on so many points,add libbed and hit the mark even stronger. Quick witted!Played it back and we laughed harder. Our family has had some losses and she was what the doctor ordered. The power of laughter, truly heals. My moms 81st Bday, she was still laughing the next day. Still laughing. Trying to make my mom's Bday special and she brought it over the top. Thank you, Thank You Angela! for helping us laugh at ourselves and not take ourselves so seriously. Can't wait to recommend or hire her again!,<3 her!

Angela was a fantastic performer. She new her material well, which is saying a lot being I sent her like 3 pages of information that she had to figure out what to use in a short 45 minute performance. All of our guests had a great time and complimented Angela for being the min success of the party. We actually couldn't get enough of Angela. We all laughed so hard that our jaws hurt the next day. She really knew how to involve the crowd without making anyone feel uncomfortable. I would definitely recommend Angela and I will also probably hire her again. We had a blast and I am so grateful that I had the idea to google comedian and Angela's name popped up. Thank you!

Angela was very entertaining. She worked the crowd wonderfully and related perfectly with the folks that work at our company. I think whe would do well at ANY event as we have a diverse crowd. One of the guests who is a professional from Indianapolis said she intends to contact Angela about working their HS reunion! Great work, just spicy enough without going over the line. I think she has a good read on the crowd and could ratchet up or down the "spiciness".

From the moment I made initial contact with Angela I felt very comfortable with hiring over the internet. Her personality is bubbly and sincere so I felt confident in my decision. Her performance absolutely made the party. Everyone was laughing and very hard. Afterwards I had more people asking me where I found her, and saying how much they enjoyed the show. I did not have one negative comment. So for anyone looking to take the ho-hum out of a party or celebration I highly recommed Angela Riccio.

Ms.Angela Riccio was very professional in every way. First of all, she made every effort to personalize the show (bridal shower), so the event was a sort of roast of the bride and groom. She asked me to forward any amusing information about the couple, and she used this information as hysterical material for her performance. The guests are still talking about the hilarious comedienne and are saying this was the most fun shower they've ever attended. I would highly recommend Ms. Riccio to anybody! Her terrific entertainment made the shower a memorable event for the special couple.

Angela did a terrific job of entertaining the employees at our corporate party. After her performance, they were all talking and laughing about things she said and did during her performance, and they were still talking about it when I walked into the office Monday morning. They were telling those employees that couldn't attend the party that they missed a great time, particularly because of Angela. The owner of our company was not only happy about the fact that the employees enjoyed themselves, but he was very pleased that such a comedic talent performed at our party.

Everyone at the party loved Angela Riccio. Many asked how I found her. I said at Gigmasters online. I choose her out of all the ones that I looked at because I liked her mini video clips the best. Anyone one can put together a good resumeon paper, however, seeing someone put their skills to work is the true test. Angela Riccio was Wonderful! She's got lots of talent! Angela made my Father's Surprise 60th Birthday Party everything I could imagine for me and my entire family. Thanks so much Angela!!!! Tanks for the great memories!

It was non-stop laughter from the time Angela began mingling, took the stage, and then concluded by leaving us some hilarious parting gifts. I was impressed that she was such a quick-study of the information I gave her about my company and co-workers even though she received some of the details at the last minute. She's not shy AT ALL, very spontaneous, and she's naturally a "people person." Everyone was a fan even employees who went up on stage to be "roasted." They headed to the stage even before she got their full name out. This was my first time hiring a comic and I could not have selected a better or a more original talent than Angela Riccio. 4 STARS

She was terrific. I was able to have multiple calls/emails with her before the event. She was well prepared to roast individuals at the dinner and did so with just the right amount of edginess - never going too far. She was a very pleasant person and very easy to work with. We accomplished what we wanted - a surprise birthday party for a 60-yr-old and a very memorable event for a large extended family.

Angela Rico performance was outstanding. My guest loved her. She was very funny mingle well with the crowd. I got a lot of compliments all day. My guest wanted to know where I got her from, so you know I gave them Gig masters. I will be using her again and yes she was the life of the party. 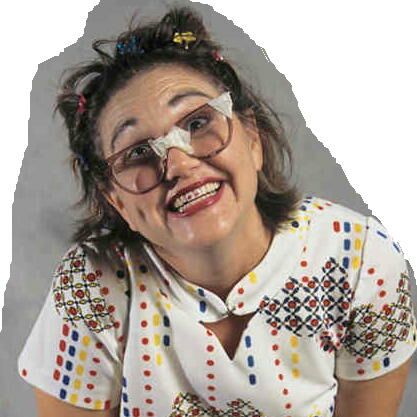