What is an Armonica?

The Armonica, also called the glass harmonica was invented by Benjamin Franklin in 1761. In 1757, while in England he attended a concert given on the wine glasses. He thought it was the sweetest sound he had ever heard but he wanted to hear more harmonies with his melody.

What is an Armonica?

Graduated size bowls with holes and corks in the center were put onto a horizontal spindle and rotated by a flywheel and a foot pedal. Moistened fingers rubbed the edges to produce the beautiful sound.

Benjamin Franklin used a most unique way to identify the notes of the bowls. He painted the seven white keys, the seven colors of the rainbow and the five black keys, white. The practice of gold banding was begun in 1785 by Karl Rollig of Germany (see picture below of Franklin's own Armonica and remaining bowls at the Franklin Institute in Philadelphia). 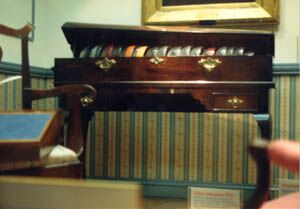 The Armonica was an instant success. Marie Antoinette took lessons on it and Dr. Mesmer, the famous hypnotist, used it to put his patients into a deeper trance. Composers started writing for it. The most famous...Mozart, Beethoven, Donizetti, Richard Strauss, and Saint-Saens.

By the mid-1800's, it suddenly lost its popularity, and gradually vanished. Superstitions ran wild.. Armonicas were said to drive performers mad and evoke spirits of the dead because of its eerie and haunting sound. It had a rebirth in 1982 through the efforts of the late master glass blower named Gerhard Finkenbeiner, of Waltham, Massachusetts. The "new-old" Armonica is now reaching into many corners of the world and has moved into the 21st century.

Ben Franklin and the Armonica 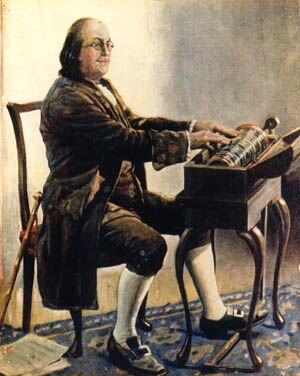 Benjamin Franklin was a fine amateur musician who was very knowledgeable in the history, theory, and harmony of music. He studied music as a science, and practiced it as an art. It is said that he could play violin, cello, harp, and guitar. When Franklin drew up plans for his home in Philadelphia, he specified a particular room for music and entertainment. This room was on the third floor, painted blue, and became known as the Blue Room.

The Blue Room housed his musical instruments which included the Armonica, a viola da Gamba, a Welsh harp, a harpsichord, and a set of tuned bells to help him tune his harpsichord which he said "when properly tuned, it's music exceeds what can be produced by common instruments, but (without the bells) too useless for me."

He loved to play duets with his daughter, Sally, she on the harpsichord and he on his "beloved Armonica." Of all the things Franklin accomplished, the Armonica gave him his greatest personal joy.

Franklin loved to play Scottish songs as he felt their beauty lay in their simplicity. Franklin loved to sing and often joined friends in evenings of song. He felt singing was a melodious way of speaking. He wrote lyrics to many songs which included "My Plain Country Joan", a song that extolled the virtues of his wife, Deborah.

Franklin attended many concerts in his lifetime, some in America but more in Europe where he spent over 28 years as Colonial representative in England, and then in France as Ambassador.  In fact, while in England in 1759, he attended the last concert of The Messiah conducted by Handel just eight days before the death of the composer. In his diary, Franklin wrote that he saw "the sublime old man, one of the sturdiest characters of modern times, led to the organ for the last time to conduct one of his works."

Cecilia Brauer and the Armonica 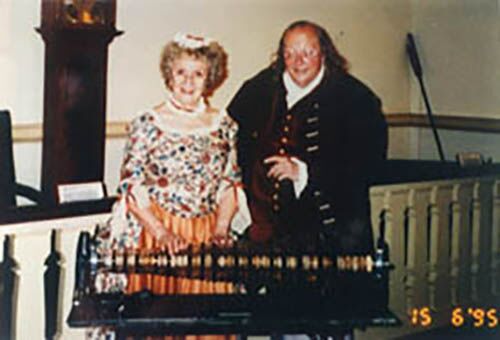 Cecilia Brauer studied the piano with Isabelle Vengerova at the prestigious Curtis Institute of Music in Philadelphia. Later teachers have included Edwin Hughes and Muriel Kerr. She has toured the U.S. in concert and has been an associate member of the Metropolitan Opera Orchestra since 1972 where she plays the celeste, and when on tour, the piano.

In 1991, Cecilia added a new dimension to a very successful piano career, namely, the Armonica. She is now one of only a handful of musicians in the world actively involved in performing on the instrument.

She has been featured on "The Morry Story" on CBS-TV, and on "New York Views" on WABC-TV.

She introduced her program into the public schools elementary system where it has been enthusiastically received by students and educators alike. Cecilia is most pleased to have been involved in the following:

Useful Links About the Armonica

Please feel free to use the following links, which will lead you to more information about Benjamin Franklin and the armonica: