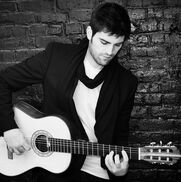 Rich Barry
(133)
246
Verified
Bookings
Verified Bookings
Booked 48 Days Ago!
Rich Barry
133 Reviews
Classical Guitar from Washington, DC  (24 miles from Ashburn, VA)
Rich Barry was praised by the last direct pupil of Andrés Segovia as "a truly innovative musician of the 21st century". His career spans 30 years of dedication to the guitar as a soloist and in ensembles since the age of 5. He has appeared on WYPR 88.1 NPR News with Tom Hall "The Art of The Classical Guitar", "In Concert" on DC TV, "Hello Baltimore" on FOX45 and for music segments on WGAL TV, and WHTM TV. In the last decade Rich has performed in New York, Knoxville, Dallas, Denver, Boca... (more)
Classical Guitar from Washington, DC  (24 miles from Ashburn, VA)
SAVED

Chris Thomas
(1)
2
Verified
Bookings
Verified Bookings
Chris Thomas
1 Review
Singer Guitarist from Washington, DC  (25 miles from Ashburn, VA)
Hey, y'all! I'm Chris Thomas and I hail from the greater DC area...I've been playing guitar since I was a kid and have been a singer/songwriter since I was a teenager; it's just a way of life for me now! I've been playing semi-professionally in the region since 2008 and have just recently moved from Central Maryland down here to the DC area a few years ago. Take a look at my influences below and know up front that I grew up during the Dave Matthews/John Mayer era of acoustic... (more)
Singer Guitarist from Washington, DC  (25 miles from Ashburn, VA)
SAVED 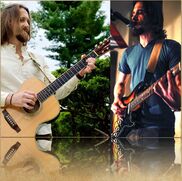 Ryan Cook
(48)
65
Verified
Bookings
Verified Bookings
Booked 27 Days Ago!
Ryan Cook
48 Reviews
Singer Guitarist from Philadelphia, PA  (139 miles from Ashburn, VA)
Ryan Cook does music for a living. You'll be hard-pressed to find better entertainment for your wedding or event anywhere in the Tri-State area. Think of the difference that you get when you find someone that does their craft all the time as opposed to someone that does it on occasion - it is same difference between professionals and amateurs. Keep this in mind when making a decision on who to hire for your event. When making a living as a musician gets difficult amateurs will hedge their... (more)
Singer Guitarist from Philadelphia, PA  (139 miles from Ashburn, VA)
SAVED

Jeffrey Nowmos
(36)
60
Verified
Bookings
Verified Bookings
Booked 38 Days Ago!
Jeffrey Nowmos
36 Reviews
Acoustic Guitar from Cape May, NJ  (137 miles from Ashburn, VA)
I can do everything a cocktail pianist can do except on guitar. I have a large reportoire of pop/rock which I play complete with melody and harmony as well as nearly all standard jazz and classical. Tell me your favorite songs and I'll learn them (if I don't know them already!) If you like the Beatles, try and stump me, I know nearly their whole catalog. Frank Sinatra? No problem, too. I can also do the above on piano and ask about duos, trios for wedding ceremonies, cocktail hours and... (more)
Acoustic Guitar from Cape May, NJ  (137 miles from Ashburn, VA)
SAVED
19 MORE RESULTS »

Where are you looking for top 40 guitarists?
Use the links below to begin your search!